How does Columbus rank Nationally for the Bed Bug Epidemic?

Pest Control Giant – “Orkin” recently released their rating on The Top 50 Most Bed Bug Infested Cities. Clearly, the Bed Bug situation for Ohio is grim. Cleveland moved up 5 spots from last year to #8. Dayton moved four spots to # 11. Cincinnati went from the worst in the Country to the 5th worst right in front of, you guessed it, COLUMBUS who stayed the same as the 6th most Bed Bug Infested City.

So what does all this mean? 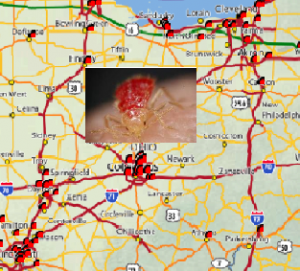 First of all, this is just “Orkins” rating. Orkin is the biggest name in Pest Control, but their data is only based on their market share of cities included in their “Top Ranked Bed Bug Cities.” It’s really hard to say how accurate the data really is. However, If you live in Ohio and you are not a hermit, you are always at some risk. Don’t freak out, just take some measure’s to make sure you don’t end up infested with bed bugs! Familiarize yourself with prevention tips and signs of Bed Bug’s. Remember, early detection is key! Remediating a few bugs is MUCH easier than remediating a home with bed bugs in several different areas.